In the fast-evolving media industry, fashion influencers have brought about a lot of disruption. In the age of who-buys-magazines-anymore, they’ve become the go-to entities to follow. But there’s a crucial ingredient they need in order to take over the magazines. 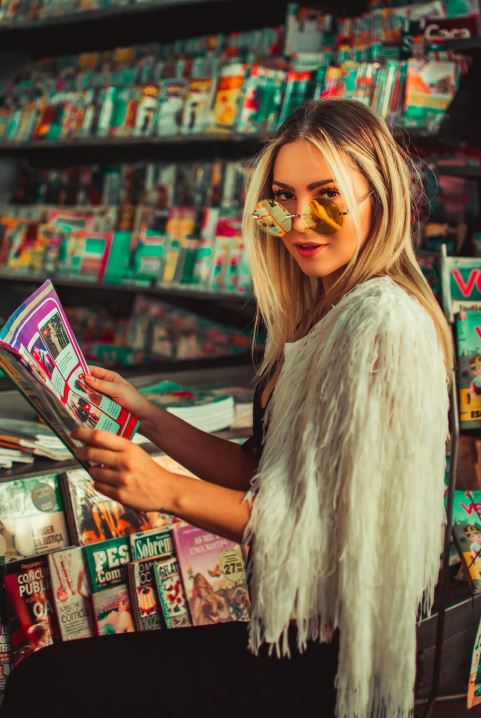 What would fashion magazines be without their stories? For many a fashion “reader”, flipping through a fashion magazine has always been about checking out the pictures rather than reading the stories. It’s not their fault, however. Magazine editors design the pages in a way that emphasizes the pictures.

Magazine stories are planned visually, with editorial pictures filling up whole pages, sometimes even double page spreads. Captions are just an afterthought, added on their side without interrupting the image. In a recent article, New York Times called Harper’s Bazaar a “storied magazine” with “astutely art-directed” content.

Even with a focus on excessive consumerism to buy unaffordable fashion showcased on stick-thin models who lead an inaccessible lifestyle, magazines were the voice of the fashion industry.

2010s: The Decade of the Influencers

However, the last decade changed everything. As fashion influencers became as much of an influence over consumers’ buying decisions as the fashion magazines themselves, the Instagram era made us question the future of the importance of fashion media itself.

The influencers are neither the Miranda Preistlys of the world, nor are they the Andys – they may not be able to explain the whys and hows of fashion, but they don’t laugh at it either.

They are somewhere between fashion magazines and consumers – they are the media that people consume, but without any requisite fashion industry experience, the design or journalism degrees. They are without the responsibility of steering the world of fashion in the right direction.

Nevertheless, they do have a hand in steering it.

From making the white sneakers every girl’s wardrobe essential in the mid-2010s to promoting body positivity through plus-sized representatives, influencers have already contributed more than people give them credit for.

Just like magazines construct a picture-perfect world of couture, influencers build a fantasy world that’s closer to real life. Their feeds are where the fashion fantasy is fulfilled.

Every theme reinforces a style choice and sets a trend, just like the glossies. With their curated lifestyles and picturesque OOTDs, they make fashion more accessible, more understandable. You can hate ‘em, but you can’t ignore ‘em.

By the mid-2010s, fashion bloggers already started filling the coveted front row seats at the shows of some of the top fashion designers in Milan, Paris, London and New York. According to Business of Fashion, 87% of brands in Europe and the US invested in influencer marketing by 2018. In the same year, fashion brands spent $2 billion on influencer marketing, 40% of which was on fashion and beauty.

In 2017, Forbes published that 72% of millennials reported making their fashion and beauty purchase decisions based on Instagram posts. A mindspace that magazines had ruled over for more than a century was now shared with inexperienced fashionistas – industry nobodies – who challenged the authority of the magazines. This transition happened so quickly that a cold war ensued between influencers and fashion magazine industry.

Influencers were essentially a product of the market gaps in fashion media. They brought to light these problems of elitism and body image issues that the glossies had so far promoted. On the other hand, magazines spread negativity about the influencers. In 2016, Vogue US called them “pathetic” and “desperate”, “heralding the death of style.”

Brands, realizing the influencers’ increasing clout, began to hire them to promote products through collaborations. With this validation and increased sense of purpose, influencers began churning content that was, at times, as aesthetically pleasing and thought-provoking as any fashion magazine editorial – professionally shot and styled.

Soon enough, the fashion brands and designers realized that it was cheaper to do this in-house. Creating their own content gave them more creative control and greater transparency of their marketing ROI. They built their own fashion editorials and curated social media feeds.

Capturing a ‘mood’, telling a ‘story’, their content bore an uncanny resemblance to that of the fashion magazines. Just like the average consumer followed the glossies and influencers for advice on fashionable products and how to wear them, they now followed the brands too.

Magazine sales dropped and some reduced their editions. Some, like Teen Vogue, topped their print editions altogether in 2017. And in 2020, the influencer marketing industry is beginning to show signs of distress, even as people spend on clothing more than ever. The fashion industry, in 2017, increased in size to $2.4 trillion according to McKinsey Global Fashion Index.

Fashion brands won the battle between magazines and influencers.

In an age that blurs the lines between branded and authentic content, do fashion magazines play a larger role than informing the public on what’s trendy? Fashion media has always been a visual media, but is there more to editorials than the products they showcase? Certainly there is – that’s why their digital avatars are still surviving in this competitive age of the internet.

How Influencers and Magazines are Similar

Magazines have a variety of stories. There is the quintessential, nearly unbiased coverage of red carpet celebrity fashion. Then there are the how-to-articles like so-and-so things a woman needs. Or ways to wear a so-and-so every woman should know. There’s the authoritative tone in these trademark titles.

But essentially, they all seem to serve the same purpose – to showcase the newest fashion & lifestyle products, or ways to use them. These articles are product showcases without being ‘ads’.

And that’s also what a typical Instagram influencer’s feed looks like. Image after image showcasing ogle-worthy outfits, the captions talking either about the product directly or through the avatar of motivational quotes about life and personal style, aiming to spread positivity to their “fam”.

Both forms of media use the same fashion clichés, overusing words like ‘statement’ or ‘must-have’ to the point they lose all their meaning. In her book Glossy Words: An Analysis of Fashion Writing in British Vogue, Anna König wrote, “It is possible that the feelings of ambivalence generated by these “guilty” texts have contributed to the lowly status of fashion journalism, in the eyes of readers and academics alike.”

However many followers an influencer has, the basics of creating a personal brand are the same as that of creating any brand. Brands, like people, need to take a stand. They need to have a voice in order to create a lasting relationship with the consumer.

How Influencers and Magazines are Different

Ultimately there was more to traditional fashion magazines than glossy spreads and editorial styling captioned with overused jargon. Hidden among mindless celeb style, gossip columns and shopping lists, the glossies provided the reader with a voice. Opinions on how fashion industry needs to evolve.

A voice independent of consumerism and an intellectual narrative beyond the vanity. A voice that’s strong and thought-provoking enough to change the industry, if required. And that was the reason the magazines held the authority they had. This is how fashion magazines influence society.

Some of it is still the same with the best media houses in the industry. Despite public’s backlash telling them to “stick to fashion,” Vogue US gave incessant commentary on the American elections of 2016, and clearly endorsed Hilary Clinton. They have also been at the forefront of the ‘free the nipple’ movement. Harper’s Bazaar did a video where models share stories of sexual assault in the fashion industry, and has published many a piece about feminism and the gender-pay-gap around the world.

A Voice is the True Influence of Fashion Media

Without a voice, the fashion media – be it influencer or magazine – is just a multi-brand product catalog screaming, “Wear what I wear” and “Buy what I recommend.”

This is not to say that influencers don’t have a voice at all. As I mentioned above, many niche vloggers and bloggers talk about the oft-ignored things in the industry. Some urge beauty brands to make more dark skin makeup. While some others condone how the industry has a clear preference for the skinny body type.

But the average influencer, more often than not, takes up the voice of whichever brand is sponsoring their image du jour. Their captions seem to unanimously display love for almost everything in every new collection, as long as it’s from a top brand.

Will Fashion Influencers Become the New Voice of the Industry?

Today when the consumers are increasingly viewing branded content just the same as influencer OOTDs, it makes me wonder. Without the opinion pieces and industry commentary, what influence does any form of fashion media really have?

It is their responsibility to be the voice of the society, to bring to light the larger issues in the industry and to lead discussions on what fashion is and should be.

But if the fashionistas and magazines become one and the same without an independent voice, then we are all essentially following the brands in a confused world of endless buying choices and no decisions. Without its cultural and intellectual contribution, there will be nothing left to fashion than consumerism.

If the influencers can’t contribute more than wearing what’s trendy, then these trend-setters will become a passing trend themselves. Do they have what it takes to rise above the fashion brands and have an independent voice? To say no to a paid collaboration if it conflicts with their beliefs? Do they have beliefs to begin with? More to offer than just being walking billboards? Only time will tell.

You may also like:
Why Does the World Look so Politically Polarized Today?

On ShilpaAhuja.com, our sister site:
2010s Fashion: The Grand Narrative of a Decade

Shilpa Ahuja is the Editor-in-Chief of OpiniOwn. She has a Masters in Design Studies (MDesS) degree from Harvard University Graduate School of Design, class of 2011. She is also the founder of Shilpa Ahuja Media (SAM).

Originally from Chandigarh, Shilpa also has a professional degree in architecture and has worked in interior project management. She is also the author of the book “Designing a Chinese Cultural Center in India”. For feedback & questions, please email her at contact@shilpaahuja.com.