“The ‘It’s a phase’ was accompanied by ‘You came out because other people are coming out as queer’ or ‘She just wants attention’,” Shreya Jain writes about her coming out journey. “You aren’t alone in this and this article will make sure to let you know that.”

Coming out as queer in this society is no Instagram affirmation caption or a delightful sitcom. The society has now become more accepting of the queer community. Although, coming out or even discovering your identity can still be a spectrum of mixed emotions of fear, stress, joy, and relief.

What exactly is coming out as queer you may ask? It’s traditionally when someone sits their friends or family down and tells them they’re a part of the LGBTQ community. It’s either followed by a tearful ‘This is a phase’ or ‘Are you sure? you might be confused’ or a loving acceptance of the person.

It’s Definitely not a Phase…

It was a long and difficult road to come to terms with my sexuality. Not because I wasn’t sure of it, but because I was afraid of the exact comments I received. My family always made joking comments about how I could be with anyone but they’d prefer I never settled down with a woman. 3 years later, and here I am – still petrified of my family ever discovering the truth.

It has been onerous but I wanted to make it easier for youngsters and adults who are exploring their identity or want to come out. You aren’t alone in this and this article will make sure to let you know that.

Many people consider homosexuality to be a modern-day phenomenon. Although did you know about the images in the temples of Khajuraho? It shows women erotically embracing other women and men displaying their genitals to each other. Just because it was prohibited or went against the norms, doesn’t mean there is no evidence of same-sex love or homosexual activity in the past centuries.

Traditional customs or laws banned homosexual activity. Medical authorities, the church, and the state persecuted anyone participating in such activities. How did the communication of this disapproval take place, you might wonder. It was horrifying, to say the least. Authorities conducted very public sensual trials, exile, and gave medical warnings. This gave rise to decades of homophobia.

Exodus International was one such horrifying organization that supported the ex-gay movement. They claimed that gay people can become straight through prayer and conversion therapy. Netflix released a hard-hitting documentary called Pray Away, recently, in the June of 2021. It explores the truth and behind-the-scenes footage of 5 individuals who enrolled in Exodus International, created in 1976. These individuals foraged and underwent harmful and mentally exhausting experiences for years together in search of acceptance. Acceptance from their family, and the higher power, the one who created us. A majority of the people in the past and even in the present are made to believe that God cannot and won’t love you if you participate in such ‘lewd’ activities. People have had to suppress their feelings and identities all around the world for such reasons.

But now, coming out as queer has become much easier, right? Or has it? Let’s take a look at conversations I had with people from the queer community. They’ve poured out their heart and experiences to let you know that you know that you’re not the only one.

Exploiting the Society with Personal Experiences

In an interview with a 21-year-old Muslim from Saudi Arabia, currently living in India, she speaks about her experience and struggles with coming out as queer to her family and society. She made a bold move to come out in the September of 2018 to her friends on social media and her family. Her path to accepting herself as queer in itself wasn’t as easy as it might seem to be.

She dealt with internal homophobia and took years to embrace her identity to the fullest. “I grew up in an Islamic country with conservative parents. That tells why, doesn’t it?” She sighs and tells me. Woke up one day in 2018, she decided to take it to social media to announce it to her friends.

She came to terms with her sexuality and knew there was absolutely nothing wrong with it. An hour after she took it to Instagram, she decided to sit her mother and siblings down and come out to them too as bisexual. “My siblings apparently always got a hint of bi energy from me and were supportive. As for my mother, it took a little while. Although, it eventually didn’t matter what her daughter’s sexuality was as long as she was happy.”

Was Her Coming Out as Queer all Rainbows and Sunshine? 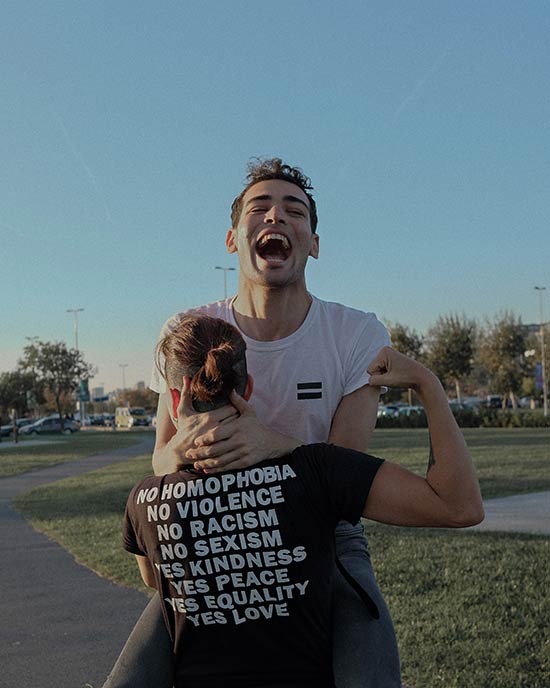 Was everyone embracing and welcoming? A couple of her friends and acquaintances weren’t as supportive as they probably should have been. She received backlash and negative comments on coming out as queer. She heard the usual ‘It’s a phase, you’ll get over it’ and the infamous, ‘I don’t understand bisexual people’.

When asked why she couldn’t be open with her father about who she was and it was one simple reason. Extremely homophobic. He wasn’t even okay with the idea of the fictitious characters, Cam and Mitchell, from the TV series Modern Family, being wed. He wasn’t aware that the US had legalized queer marriage and India, now. 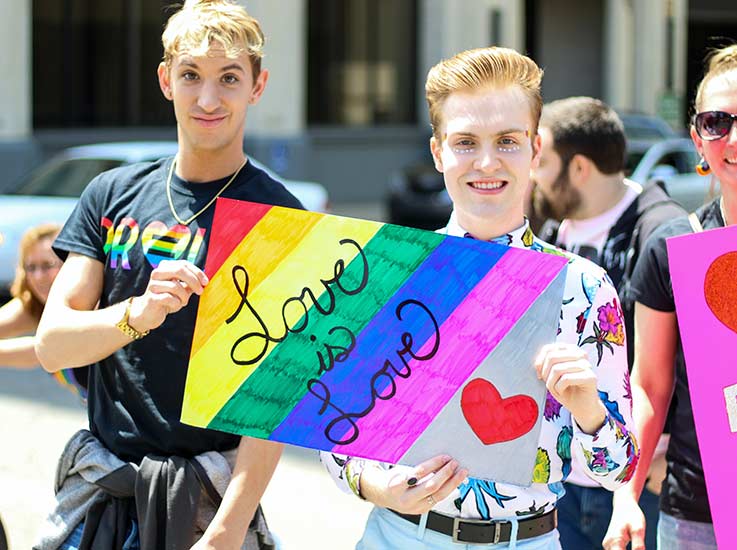 Her father uncomfortable with the queer culture made her not want to come out to him. The experience with her father made her second guess her sexuality for just a little while in the past. But eventually, got over it. If in a relationship with a woman in the future, she agreed that she still couldn’t come out to him. She didn’t want to lose him in her life. That’s the issue with a lot of us, right?

“I think sexuality for me is fluid and right now, I find it comfortable in being identified as a lesbian,” she tells us. As open she is about her sexuality, putting labels isn’t something she finds necessary. An independent strong queer woman who helped me discover a part of myself in 2018 that was closeted.

Her very difficult path from coming to terms with who she is to coming out as queer to everyone gave me the strength to feel comfortable about my sexuality. No matter how bad things might be, I hope this story works wonders on you readers too and lets you know that you aren’t alone.

The Queer Community Speaks Up

I interviewed a few more people from the queer community, people in their teens and 20s. All of them were willing, excited to say the least, to talk about their experience. They had a safe space to talk about the wrongs done to our community.

“So this one time I made a joke about me and this girl being together and I was shunned from that group.” – 22-year-old from Chennai.

“Their first response was usually fetishizing. Stuff like, ‘Wow that’s hot. Call me when you make out with a girl’ or ‘HMU when you are bored of plastic’. I can’t explain why but it felt humiliating and dismissive.” – 20-year-old from Kolkata

“My friends were very supportive but I’m pretty sure the response I get from my family, if ever I come out to them, is going to be the most negative. It terrifies me.” – 16-year-old from Bangalore

“When I was ready to come out to people, I was mentally prepared for everyone to stop being friends with me.” – 24-year-old from Bangalore.

The queer community to date receives negative or degrading comments and is terrified.

You thought joking about you with the same gender wouldn’t be as bad in today’s scenario? Tell that to the strong 22-year-old who still decided to come out regardless of the mindset of people around her. Straight people fetishizing the fact that you’re bisexual? Let’s be honest, it’s probably the most common comment we bisexuals hear.

Will the Queer Community ever be Completely Accepted?

‘Coming out’ in general personally doesn’t seem deemed necessary for me. But where and how we live, the idea of someone being part of the LGBTQ+ community seems out of the normal for some. We’ve come to a stage where society has become more accepting of the LGBTQ community. Although, there’s still judgment passed around by some communities and people to anyone who seems comfortable in being who they are.

Being queer historically has not been easy. Coming out for some people might be a luxury. Luxury such as the accepting people they are surrounded with. But, it might not be as easy for others. In the end, I would recommend the following factors such as your personal safety, economic independence, societal situation (for example, the mindset of your friends and family) before coming out.

Several in the queer community, including people I know, have been accepted with open arms as they came out. This is now possible because of the education that people in the 21st century have received. Because of the awareness, they are definitely more accepting than in the past. Although, there still lies a fear of the uncertain. Not knowing how people they are surrounded by will react, which can be scary, to say the least.

Is Coming Out Necessary?

You might even believe ‘coming out’ is unnecessary or you aren’t very comfortable yet having someone else know your identity. That is perfectly alright too. Make sure you accept yourself for who you are first and be comfortable with your sexuality before you decide to announce it to the world. Understanding these very small things helped me come to a stage where I’m comfortable with my sexuality around my friends but not my family as of yet – and that’s absolutely fine by me. 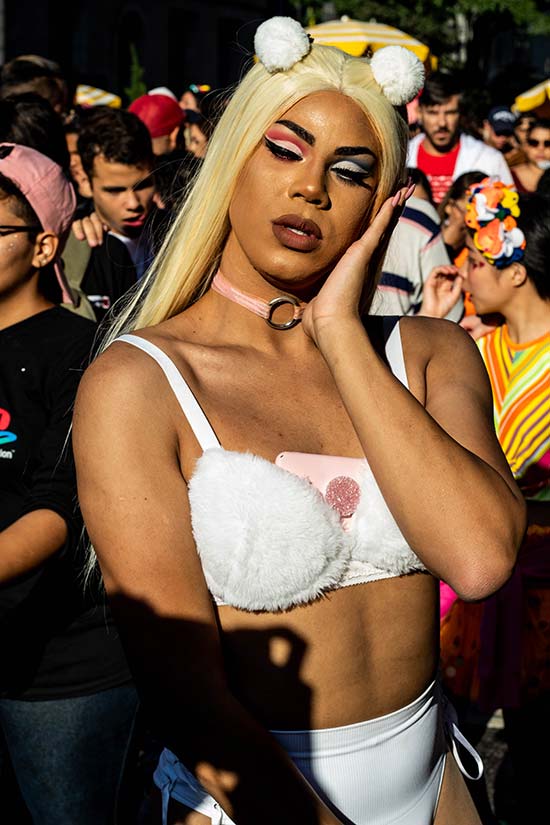 We’re in the 21st century, yet it’s still so hard to speak up and express yourselves. One goes through an oozing amount of emotions within themselves before they can truly come out to the world. It may seem easy to the rest of the world or ‘attention seeking’ but in reality, it feels like freedom. It’s a victory, it’s our way of accepting ourselves, and self-love/acceptance beats societal concerns.

Remember that being part of the queer community is NOT wrong, no matter what anyone tells you. Our community is a place for people to be who they want to be without any judgment. It’s okay to take your time and be open about it when you feel necessary or secure. Because if you aren’t yet, your little secret is safe with us!

Unhappy Indian Millennials: Are We Still Trying to Please Our Parents?

Shreya Jain is a Fashion Journalist at Shilpa Ahuja Media. She is from Bangalore and currently doing her undergraduate in Fashion Communication and Styling from ISDI School of Design and Innovation, Mumbai. She aspires to build her career in fashion writing and fashion styling and make her mark in the industry. She has a fashion blog and runs an online thrift store. She is interested in photography, sketching, and also runs her personal account on Instagram where she regularly shares how she styles her wardrobe. She is passionate about traveling and meeting new people. An adrenaline junkie, she has been skydiving and cannot wait for her first scuba diving experience. She firmly believes that people create their own destinies.