Amin Bagheri, researcher of International Relations & Political Science, discusses how the intervention of other countries has driven Libya into a civil war, which is on a dangerous path after the defeat of General Khalifa Haftar. 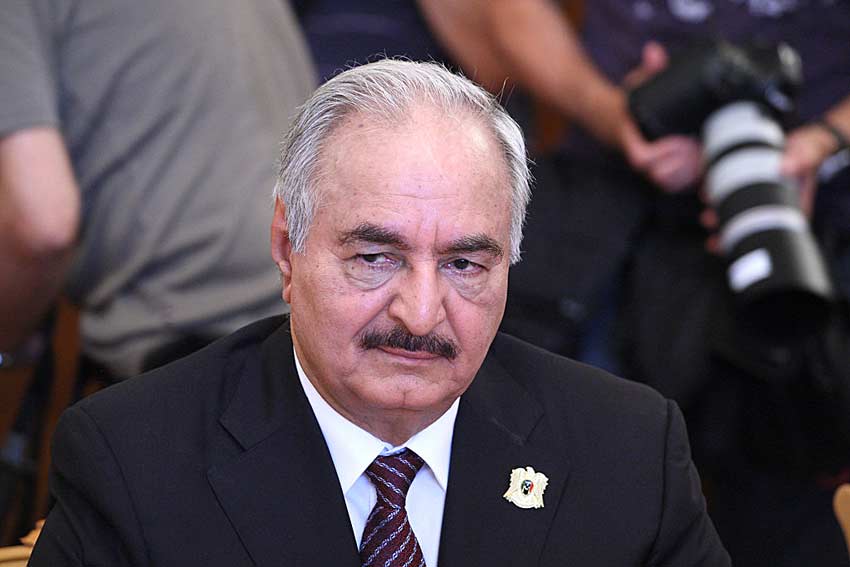 Libya’s developments are largely in line with the victory of the National Unity Government and the relative defeat of General Khalifa Haftar. Following the liberation of Tripoli Airport from Haftar militants, the UN-led coalition was able to achieve some of its goals under the current circumstances, but Libya’s fragile situation and political and ethnic structure seem to indicate continued unrest and clashes between general Haftar against the rightful government and it`s ally Turkey. As one of the important allies of the national unity government, Turkey is slowly talking about victory. But it should not be overlooked that in recent months, the results of the battle in Libya have always been variable and fragile. It is likely soon to announce the complete defeat of Haftar and the consolidation of Al-Saraj’s government`s position.

One of the important variables in the process of Libyan developments is that Russia did not support Haftar seriously and decisively, and Saudi Arabia and the United Arab Emirates did not have the political and financial support, as well as the intelligence and political cooperation between Egypt and France which has prevented Haftar from winning so far. However, in the face of Libya’s right to self-determination, the government has been able to weaken Haftar’s affiliated militias by providing extensive air intelligence from Turkish drones, which is why it has stated that the Turkish military is a legitimate target for its forces. In recent months, Turkey has paid a heavy price for aiding and abetting the national unity government of Fayez al-Saraj and its victory in the sensitive and dangerous field of Libya. From economic and military costs to being in a difficult position against Russia. In the current situation, Turkey has managed to achieve some of its goals in the Libyan case, but the fragile state of Libya and its political and ethnic structure may not allow Ankara to hope for a long-term role.

The social nomadic structure, the sensitive geographical location, the sharp decline in oil prices and the dependence of the Libyan economy on foreign aid are some of the problems that may Turkey face with in upcoming months. But we must not forget the fact that Turkey was involved in the Libyan affair at the request of the official government and, as a member of NATO, is trying to defeat the hostile forces, which are fully supported by France, Egypt and the UAE. Thus, supporters of the Libyan national government, including the United Nations, Turkey and Qatar condemn any war against the Libyan government and try to prevent the country’s natural resources from being shared with Haftar’s supporters.

Now, after the defeat of Haftar, despite strong supporters such as France, the United Arab Emirates and Saudi Arabia, Libyan developments are on a dangerous path. But what prompted Caliph Haftar to escalate tensions was a severe blow to his hopes of gaining control of the Libyan capital, Tripoli, and forces affiliated with the Libyan National Unity Government managed to retake the town of Gharian in southern Tripoli. The city was the entrance to Tripoli and the headquarters of Haftar’s command, backed by Egypt, Saudi Arabia, the United Arab Emirates and France, and US President Donald Trump. Ahmed al-Masmari, a spokesman for the Libyan National Army, said Haftar had ordered his forces to target Turkish ships and prevent them from flying to and from Turkey. He accused Turkey of supporting the national unity government and the direct involvement of Turkish forces, fighters and ships in the clashes in Tripoli. In response, Turkish President Recep Tayyip Erdogan has denied the allegations, saying Ankara has a national agreement on military cooperation under the agreement with the government and will provide the government with heavy weapons and ammunition.

The Destructive Role of the UAE in Libya

The two main parties involved in Libya signed a political agreement in the western city of Al-Sakhirat in Morocco in December 2015, which led to the formation of a presidential council headed by the Al-Wefaq government in Tripoli. However, General Haftar has tried in recent years to thwart the agreement, and the United Arab Emirates is the main figure in supporting Haftar, which is fueling the unrest in the oil-rich country. In order to gain control of Libya’s power and take over the internationally recognized government of Al-Wefaq, Haftar is fighting with full and public support for the UAE and considers himself deserving of Libyan sovereignty, unaware that the UAE and its allies are just a bead. They use it to advance their political goals. They have been continuing their raids on Tripoli, the capital, since April 4, 2019, but have so far failed.

So it seems that the only thing we can say in a nutshell is that there is a trap that is probably spread out for the hyena to drown in the bloody swamp of Libya; An orphan created by the United Arab Emirates to ostensibly form a government of national unity but unaware that the platform will destroy Haftar, a general who, with his eyes closed and longing for absolute sovereignty in Libya, has begun to dismantle the country with the pre-determined plans of the United Arab Emirates, Saudi Arabia, Egypt and France.

In conclusion, the current trend shows that the country, located in North Africa, is following a vague path. A country that has been plunged into a state of civil war by the intervention of other countries, especially the UAE, is in a state of disarray. And Libya has become a barrel full of gunpowder that is about to explode in North Africa. It is noteworthy that this war takes place less than 400 km from the coast of Europe, and Europe is following the developments with fear and anxiety. In any case, Libya, like Sudan, is another scene of the UAE’s battle with its opponents, and this time General Haftar is the mainstay of the UAE’s allies. An elderly general who is outraged and has declared war on Ankara, but it remains to be seen whether in practice he will be able to coerce and counter NATO’s second military force or not.