Marketing expert Abhishek Sareen discusses the new controversial Audi Banana Girl advert. Heartfelt apology or a pre-planned marketing move? Is Audi’s new ad the beginning of a new era of marketing, where brands pull consumers to talk about their ads, instead of pushing ads to them?

The Story of the Banana Girl Ad

If you haven’t heard about the latest Audi Banana Girl advert (RS4 ad), then here it is. Before I share my personal opinions about this ad I would like you as a reader to build your own interpretations.

So here’s the story, Audi, a premium brand from VW group released this advertorial image on their twitter handle on August 2nd and issued an apology to the very next day on August 3rd 2020. This ad was released on August 2nd, and Audi issued an apology about it within 24 hours of publishing it.  In fact, to many like myself, the first time we noticed the ad was because it was supposed to have received instant, widespread criticism. 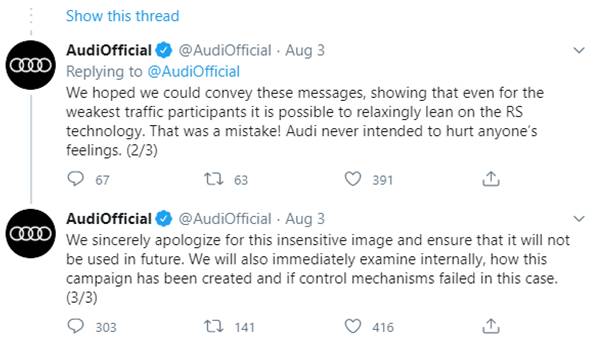 Before we dig deeper let try to interpret this ad, so here are my possible interpretations.

Personally, I see Audi depicting their car front as bold and aggressive. Its aggressive stance is accentuated when seen next to a cute and innocent little girl standing in front of it. This is very old trick in advertising where in order to dramatize an emotion or a quality it need to have a contrasting comparison. I have written about communication of dramatizing a hero like quality in my article on downward social comparison.

And the Real Story of the Banana Girl Ad

So what’s wrong about this whole story? Nothing. Except the promptness of the response. Audi releases an ad, receives criticism, gauges the wide spread reaction, crafts an apology and releases it – all within a matter of 24 hours. Such efficiency and response time to a crisis or embarrassment would put even chatbots to shame.

And this raises the question – was all this pre-planned? Did they have an apology ready, just in case? Or did they release the ad, waiting for 24 hours to go by before releasing the apology, just to make sure everyone on the internet saw it?

Instant Apology Ads are Nothing New

According to fashion magazine editor Shilpa Ahuja, doing controversial stunts and instantly apologizing for them is such a common thing in fashion industry that it no longer surprises her. Examples like cultural appropriation and racism are abundant in the industry.

“In 2018, Gigi Hadid issued an instant apology after her Vogue Italia cover faced backlash over cultural appropriation,” Ahuja says. “In 2016, Mark Jacob promptly apologized after receiving criticisms for his SS17 fashion show where white models wore dreadlocks.” Brands and celebs like Kendal Jenner, Fashion Institute of Technology, Gucci, Dolce & Gabbana, all seem to have done an act of controversy followed by an instant apology.

So the big question arises, was Audi Banana Girl advert’s criticism and apology all a deliberate and pre-planned?  And my strong opinion is, yes it was. The only beneficiary of this entire episode is just the brand Audi. Audi’s PR & marketing beautifully portrayed by mildly risking their brand image, and at the same time portraying themselves as a sensitive& relatable company. In return they have got much more of advertising value for their product and brand. What matters is everybody is talking about the Audi RS4. This would not have been possible if the advertising communication wasn’t polarizing.

In today’s times its extremely difficult of brand to cut across so much of noise and reach their end consumer. It doesn’t matter whether the communication is interpreted positively or negatively, what matters first is to reach out. This Audi RS4 banana girl advert will be etched in the mind space of people for a long time. Over the course of time people will forget whether it was positive or negative, just like the Volkswagen group’s pollution emission cheating scandal for their diesel cars. 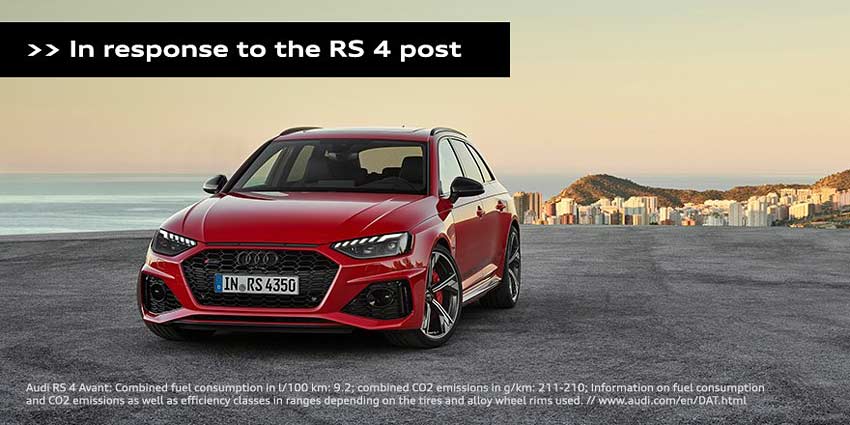 The Beginning of a New Era of Marketing

To me, Audi’s marketing and PR teams has taken a risk with the Audi Banana Girl advert. And it has paid off well. We are entering an era where marketing communication can no longer be effectively pushed via conventional mediums. Brand will need to advertising content which creates opinions.

The emergence and prominence of OTT media services have altered the consumer behavior from appointment based viewership to demand based viewership.  And this is making push based advertising more and more obsolete. Brands will need their communication strategies to become more demand & curiosity based rather than being push oriented.