Looking at the gravitational pull of celestial bodies, we can understand a lot about the society and how people influence each other. Abhishek Sareen lays out a new social theory called Celestial Sociology, which may help you understand (and reorient) your guiding forces.

Based on interstellar forces, celestial bodies can be categorized into various entities as a star, solar systems, orbiting masses (planets/moons) and rogue asteroids. If you observe the universe, you will see that all celestial bodies & systems are revolving around some other body.

It is believed in Vedic astrology that there is a supermassive black hole in the center of the universe and all galaxies revolve around it. Although that’s scientifically not true, astronomers believe that galaxies have supermassive black holes are at their center around which all other stars and solar systems revolve.  Similarly, we know that all solar systems have a star/sun in their center, around which planets and their moons revolve around.

I may be oversimplifying astronomy here, but I’m just using this as a way to explain my theory. 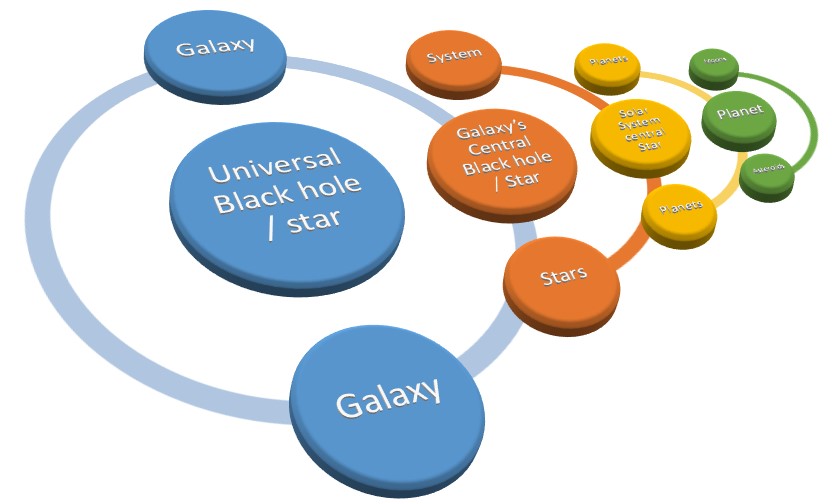 Do We All Need Something to Revolve Around?

So for the universe to exist in equilibrium every celestial body needs to find a more massive body to revolve around, so that harmony can prevail.

Similarly, once human beings have met their needs (physiological, safety, love/belonging, esteem as defined by Maslow) to a reasonable extent, they become conscious of their existence and seek a central idea so that they can be in harmony with themselves and their social universe.

Humans, being social animals, seek to find central idea or body around who they can revolve. A young child revolves around his or her parents initially. Later on they start revolving around their cool friend or teachers in school during the childhood. After that, they identify themselves with a youth icon, influencer or idol who they want revolve around. And later in their professional career, around their bosses. 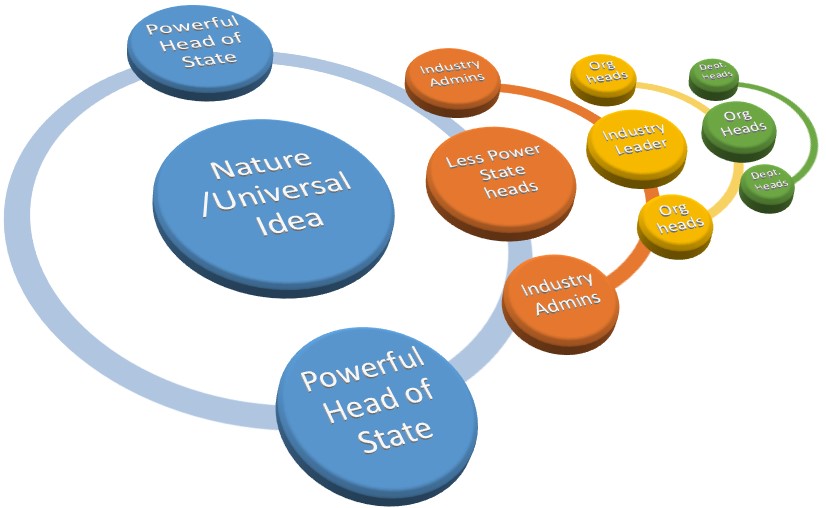 How Our Central Idea Guides Us

At any point of time in life, everyone seeks a central idea with which they can bind themselves and that they can orbit around. Here, what a human being would revolve around, could be an entity that is a source of power, a guiding principle and or a set of values. or example a company boss, religion, moral value etc.

Our central idea may serve any purpose that makes us feel that our life has meaning. It may give us a purpose. It may give us something to fill our time with, or a set of values to live by. It may keep us busy or make us peaceful.

During a lifetime, humans, like celestial bodies, seek and shift their orbits to become part of bigger, smaller, complex, or simpler systems, depending on their capability and opportunity. There may come an intermittent time, when humans may not align themselves with any other celestial body and seek to become an independent star of the galaxy. They are at that point, a rogue celestial body whose fate would be:

1) they may collide with another celestial body and perish.

2) form an independent system by attracting other celestial bodies, and then may orbit around much bigger stars.

The term celestial sociology can be defined as an approach to understand the dynamics of human beings and ideas (social forces), which influence them or which they influence.

The objective of celestial sociology is to provide a tool to everybody so that they can visually map the social dynamics of their universe by defining the celestial forces influencing them.

Birth of a Star

A star body in celestial sociology can be defined as an original or unique idea, which gets created after an “explosion”. In the human society, a star is usually the term used to refer to someone who possesses an original idea. They believe in it with utmost passion, so much so it becomes contagious and attracts others. These followers either get consumed or get trapped in the start’s orbit.

An example of a star would be Karl Marx and the rise of Marxism. The idea of Marxism was so potent that a large population wa captured by it, and a few became part of it like Lenin, Stalin.

In fact, you can observe many examples in the history of mankind. Many such stars exist or have existed, which have or have had a great influence on the masses. Some of the biggest star ideas would be:

What Forms a Central Idea

Often there is a creator of an idea, whose belief in their idea is so strong and passionate that it becomes bigger than the creator itself. These ideas or starts attracts followers, which we can call asteroids, which get caught into their gravitational orbit. They rotate around the idea, or become a part of the idea itself, adding more mass to star.

Humans are like asteroids, who can be in multiple orbits at any point of time. They can be under a strong or a weak influence of stars at any given time. It is the natural tendency of a human to constantly seek out newer and stronger orbits that can bring equilibrium in their life.

It is much easier for a human to be part of an orbit, as compared to becoming an independent star. This is because it requires much more effort and mass to break away from ideas/orbits. Oftentimes, stars die out when they run out of energy, or collide with other stars.

Why Celestial Bodies like to be in a Defined Orbit

The objective of a human mind is to think, so that it can think less. Humans thus create stereotypes and are judgmental by nature. This is called associative reasoning, and it helps us form perceptions. They try not to ask question or seek explanations as it requires more effort/energy. Most asteroids in an orbit are also very similar, they seldom collide with each other or change their position or stance.

Most people are also similarly stuck in an orbit of a few central ideas. And like a circular rat race, they keep an eye on the person behind them and think that they are ahead.

Most people believe that the majority is right. 19th-century French social psychologists Gabriel Tarde and Gustave Le Bon first brought forward these ideas, commonly known as the ‘herd mentality’. The central idea, which is questioned the least, binds these people together in orbit. It keep giving them the re-assurance that they are right because the majority is right. 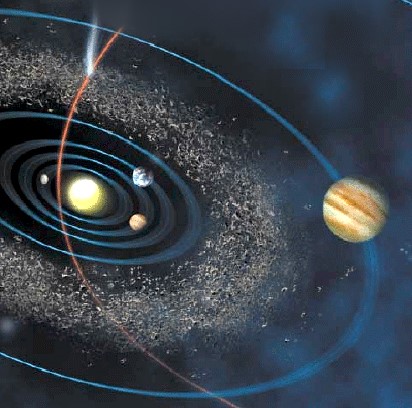 Moving Out of One’s Orbit into Space

Very few humans are able to distance them from those who are stuck in these orbital forces. But when they do, they move into space and are able to see themselves from afar. This macro-analysis helps them observe the orbital trajectory they are stuck in.

At times a satellite may break free of its planet’s orbital forces and move into space. In the beginning, it may look they have become a star. However, they either define their own orbit by connecting with a bigger idea. Or they may perish by colliding into another celestial body that might be in conflict with their central idea.

Even though some people may have the vision to see themselves from this metaphorical ‘outer-space’, they still lack the energy to break free. So they make themselves dumb again. They go back to believing in the majority and keep continuing their journey in their orbit.

Space can be defined as the place where no ideas exist. It may be regarded as a meditative state where the mind is free from all ideas or no nearby celestial force is influencing. Very few celestial bodies are able to achieve that state or move into this metaphorical space.

Even if they do, they do so for a very short period of time. For example, when people mediate and free their mind or artificially lose their consciousness using drugs. These events temporarily take them in a state where the influence of ideas is minimal.

Most people, like celestial bodies or planets, want to sub-consciously revolve round a strong central idea. This helps them think less about wavering and thus conserve their internal energy. This ensures the planets’ long term survival with minimal effort.

From my point of view, the idea of life is at the center of this metaphorical universe. It is the central idea, around which most celestial bodies revolve. People want to preserve life and prolong it as much as possible. The idea of life is to survive, thrive, pro-create. To-be-saved is central to most of our ideas and beliefs.

Conscious life thrives around strong ideas in the center, for example, communist or capitalist. Both these ideas are conflicting in nature with respect to ideologies. Here is a celestial representation how nations would co-exist in this celestial ecosystem. 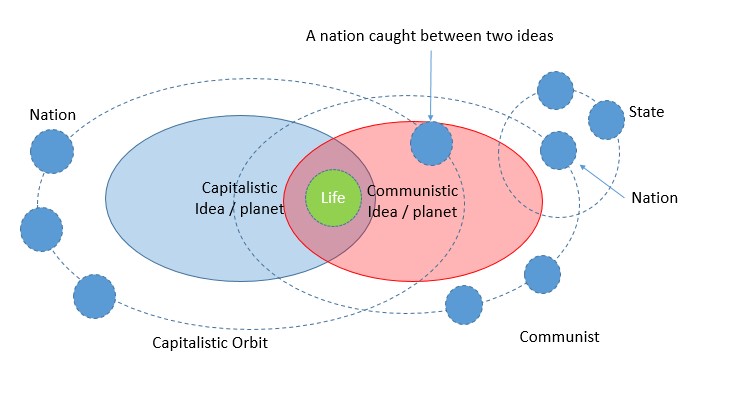